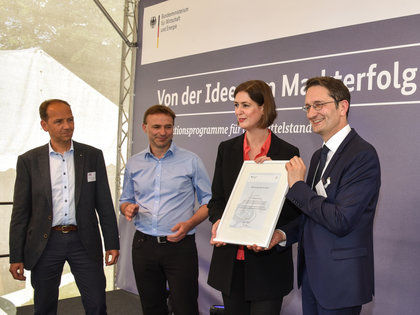 For the successful developing and marketing of a specific display controller used in glasses-free SeeFront 3D® Displays the Hamburg-based company has been awarded the title of ZIM Project of the Year. SeeFront CFO Sabine Neumann received a framed certificate signed by the German Minister for Economic Affairs Sigmar Gabriel at the “Innovation in SME Day” in Berlin on June 2, 2016.

To be named ZIM Project of the Year is an honor that reflects not only the successful conclusion of the technical development but also the commercially successful market entry. Therefore the R&D project for “Realistic glasses-free 3D experience” has been finished since 2013, laying the foundation for the production of market-compatible SeeFront 3D Displays.

ZIM (Zentrales Innovationsprogramm Mittelstand) is a funding program for small and medium-sized enterprises (SMEs) with business operations in Germany who want to develop new or significantly improve existing products, processes or technical services. SeeFront has received funding from several government programs and has successfully completed two projects funded through ZIM.