SeeFront exhibits at Endoscopy and Imaging Congress 2015 in Munich 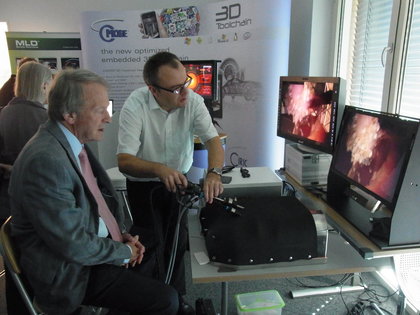 Munich-based company Time in the Box, a virtual treasury of world history, exhibited interactive 3D models of famous Bavarian castles and churches captured by laser and camera scanning on a SeeFront 3D display and an Oculus Rift device.

Medtech company Richard Wolf demonstrated their new stereo endoscope Endocam Epic 3D HD with a glasses-free 23’’ SeeFront 3D monitor as well as a glasses-based Sony monitor for comparison. Medical experts as well as attendees from other fields agreed that the three-dimensional perception is very helpful for the eye-hand coordination. Many visitors took the opportunity to try their surgery skills on a red pepper which served in lieu of a patient’s abdomen in the demonstrator.